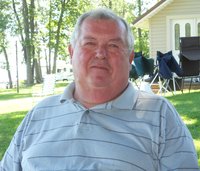 Cleveland, N.Y.- Harley D. Airth Jr., 73, formerly LeRoy and Bergen, passed away peacefully on December 23, 2019 at the home of his daughter in Flower Mound Texas. Harley was born November 16, 1946 in Batavia, son of the late Harley D.and Marian Long Airth Sr. Harley is survived by his beloved wife of 44 years, Theresa ( Palaszynski ) Airth; his daughter, Christine ( Thomas ) Kolb of Flower Mound, Texas, two grandchildren, Brooklyn and Bryce, his sister, Helen Airth from Albion and his nieces, Kelly Hasenauer, Jody (Michael) King and Marcy Johnson (Matt Verschage), along with many great-nieces and great-nephews. He was predeceased by his sister, Shirley Hasenauer and his nephew, Michael Hasenauer. Harley served in the Army and was a retired bus mechanic at Brockport Central School. Harley enjoyed hunting and fishing on Oneida Lake and he was a great fan of Nascar and also enjoyed helping out family and friends with their projects. Services for Harley will be announced at a later date. In lieu of flowers, memorials are suggested to either the Stone Church Presbyterian Church or the Kidney Foundation CNY, 731 James St. #200, Syracuse, NY 13203.