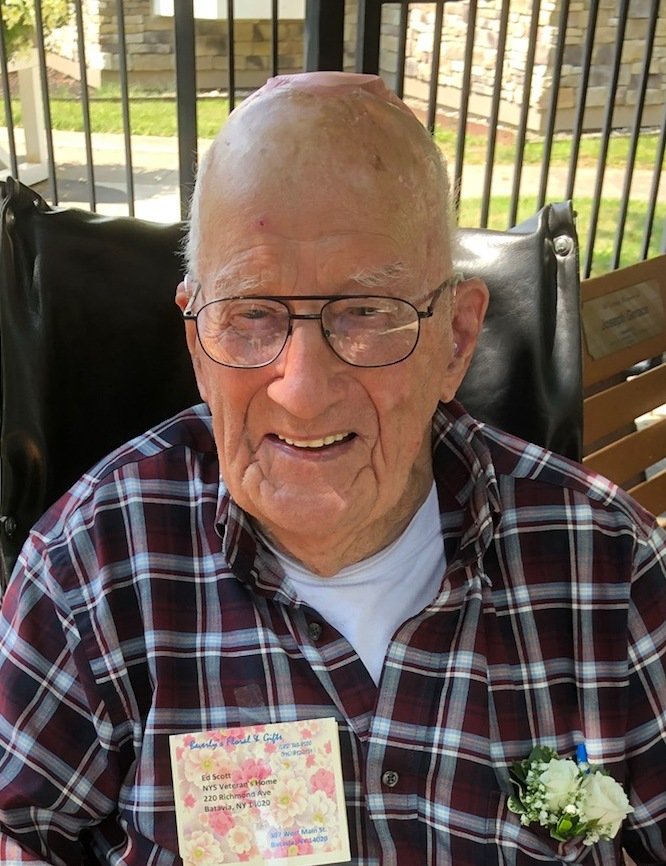 Stafford ~ Edward G. Scott, was welcomed home into the arms of the Lord on June 28, 2020 surrounded by family after a brief illness. He was 98.

He was born in Batavia on November 22, 1921, along with his twin sister Edith, to the late Jay and Alice Dampier Scott. After graduating from LeRoy High School in 1939 he enlisted in the Army and served as a medic in World War II. Upon returning from service he married the love of his life, Harriet Eichler, in 1949 and had four children. The family settled in Stafford where Ed worked on the family farm, as a carpenter building houses and at Lapp Insulator, Jello and GTE Sylvania. He was a man of faith and longtime member of LeRoy Methodist Church and United Methodist Church in Stafford.

To know Ed was to love him. He was quick witted, honest and at times mischievous. He had an exceptional love for his family and proudly told everyone his grandchildren resided around the world. He was an avid outdoorsman that could be seen riding his bike around Stafford into his 90’s and spent many winters swimming in Florida where he was known as “the Mayor”. He livened up every dance floor, never missed out on a game of cards and enjoyed playing ping pong where he lovingly earned the name “Fast Eddie”.

He is survived by his children Doreen (Gene) Vance of Hornell, Rickey (Jane) Scott of Stafford, Sue (Tom) Jasinski of Sneads Ferry, NC and Nelson (Dawn) Scott of Batavia. He was cherished by his grandchildren: Erin, Jay, Tim, Emily, Anne, Brent, Heather, April, Kyle, Tommy, Sarah, Tom and Rachael. He was proud to have 24 great-grandchildren and referred to everyone as “precious”. Also surviving are several nieces, nephews and longtime friend and companion Doris Jean Belt of Marceline, MO.

He was predeceased by his wife of 51 years, Harriet Eichler Scott and his sisters Elsie Dorsey, twin Edith Longchamps and Leona Nagle.

Family and friends may call on Sunday, July 5 from 4 ~ 7 P.M. at the Falcone Family Funeral & Cremation Service Inc., 8700 Lake St. Rd. (Rt. 19), LeRoy. (Funeral home occupancy will be limited to 33% capacity during the course of visitation and face masks will be required.) Funeral services will be private.

Visitation is limited to 33% occupancy and face masks are required.
Share Your Memory of
Edward
Upload Your Memory View All Memories
Be the first to upload a memory!
Share A Memory
Send Flowers
Plant a Tree